After three years, first pictures of inside shattered Fukushima reactor

Nuclear engineers engaged in containing the crippled Fukushima Dai-Ichi nuclear plant in Japan have succeeded in inserting a high-tech robot camera into the most badly damaged of its reactors. For the first time clear pictures are available of the area where contaminated coolant water is leaking from the containment vessel into the basement of the reactor building.

Tokyo Electric Power (Tepco), the company that owns Fukushima, said that the investigation was "a critical step not only in the management of contaminated water at the site, but, even more importantly, toward the eventual removal of the fuel itself".

Over a three-day period from 27-30 May, the camera was successfully lowered 2.7m into the pressure chamber surrounding reactor one, where it revealed that water used to cool its melted nuclear fuel rods is leaking around an elastic joint on a pipe entering the containment vessel.

This is a critical step not only in the management of contaminated water at the site, but, even more importantly, toward the eventual removal of the fuel itself– Tokyo Electric Power

The joint is believed to be suffering from corrosion. Up to 1.5 tons of contaminated water an hour is thought to be leaking from the area investigated. Tepco said it will continue to identify and ultimately plug all the leaks, adding that this must be accomplished before the reactor’s fuel can be removed.

Earlier this week, work began on a novel system to contain the leakage of contaminated water. As the construction of a physical barrier around the reactors would pose too many safety problems, Tepco is proposing to freeze the ground around it.

This 1.5km long "ice wall" will be made by inserting 1,550 pipes into the ground. Coolant circulating in them will then freeze the surrounding soil. This process is expected to be completed in March next year.

Why the wall is necessary

The Japanese government estimated in September last year that about 300 tons of radioactive water had leaked into Fukushima harbour every day since the operation to cool the reactors began in March 2011.

Water has to be used for temperature control because the enriched uranium fuel rods that powered the reactors have partially melted into the control rods that moderate the rate at which fission takes place, and, if left unattended, would reach a temperature of 2,800°C. As a result, Tepco has to pump water into the shattered reactor buildings.

However, this water then becomes radioactive, and so must be stored on site. Three weeks after the tsunami that destroyed Fukushima, Tepco had set up 1,000 storage tanks each holding 1,200m3 of waste water. A few of these developed leaks in 2013.

Since then less contaminated water has been pumped into the sea to make room for more heavily contaminated water, and Tepco began constructing treatment facilities to clean it. By September 2013, the tanks held about 330,000m3Â of contaminated water. It has now built three plants designed by Toshiba, and these began operating together in April of this year, however, this does not address the problem of coolant leaking out of reactor one, or groundwater seeping into it-hence the wall of frozen soil.

What happened at Fukushima

When it was a functioning power station, the Fukushima plant, located on the east coast on the main Japanese island of Honshu, had six light-water nuclear reactors and produced 4.4 gigawatts of electricity, making it the third largest nuclear plant in Japan, and the tenth largest in the world.

When the Great Japanese earthquake occurred about 130km off Japan’s Pacific coast on 11 March 2011, the whole of Japan moved a few metres away from China and a wall of water 15m high swept over the facility and its 10m-high sea wall.

At the time of the earthquake, which was the largest in Japanese history, reactor four had had its uranium fuel rods removed, and reactors five and six were in cold shutdown for maintenance, meaning that the water in them was below boiling point. 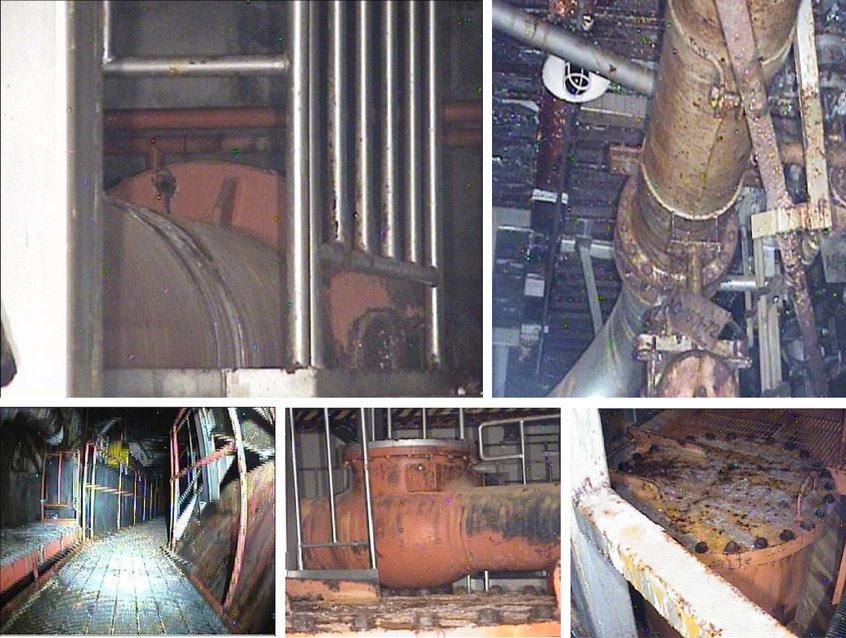 Clockwise from top left: The flexible valve that is leaking 1.5 tonnes of heavily contaminated water a day; the air-conditioning system; the entrance to the "suppression pond wetwell"; a vacuum seal valve; the reactor’s catwalk.

In the 50 minutes between the detection of the earthquake and the arrival of the tsunami, staff at the plant lowered control rods into the cores of the three active reactors to absorb the flow of neutrons and halt the fission process. However, there was residual fissioning within the fuel rods, so they continued to release "decay heat", at about 7% of full power.

When the sea water knocked out the plant’s emergency diesel pumps, that left only a last-ditch battery-operated system to cool them. The 125-volt batteries for units one and two were flooded and failed, leaving them without instrumentation, control or lighting. Unit three had battery power for about 30 hours, then that failed, too.

In the nuclear reactors at the Fukushima plant, the fuel rods were contained in a reactor pressure vessel (RPV) that was itself enclosed by a 2.6m-thick concrete primary containment vessel (PCV). When nuclear fuel in reactor one "melted" it escaped the pressure vessel and, Tepco’s engineers guessed, had pooled at the bottom of the PCV. All they could do now was to inject water into the PCVs to cool the fuel, like firemen pumping water into a fire that could never be extinguished.

The problem was, nobody knew for sure what was going on inside reactors one to three. Tepco assumed that the fuel in two and three were still in the RPV, and that the fuel in reactor one had eaten through about 0.7m of the PCV. But they didn’t know that: the area was too radioactive for human measurement, and Japan had, several years before, halted work on robots that could operate in such a hostile environment. By the end of last year, some computer simulations predicted that the fuel in reactor one had already breached the PCV and had partially eaten into its concrete foundation, coming within 0.3m of leaking into the ground.

The success of the latest attempt to insert a robot camera into reactor one has at last given direct evidence of the situation inside the PCV. Now Tepco’s engineers have to work out what to do about it.

Not on this scale before

Last week the Nuclear Regulation Authority agreed that plant operator Tepco could begin construction work on the frozen wall, which will be made by inserting 1,550 pipes into the ground. Coolant circulating in the pipes will freeze the surrounding soil. Some experts have expressed concerns over whether the project will work.

"We plan to end all the construction work in March 2015 before starting trial operations," a Tepco official said, adding that the ice wall could be operational months after construction.

Frozen earth sequestration has been done before, but not on this scale. Keeping the ground frozen when summer temperatures close to 40 degrees C may be a challenge.

Some experts, including an American adviser assisting Japan with Fukushima clean-up efforts, have expressed doubts over whether the wall will work.