The space agencies of China and Russia signed a memorandum of understanding yesterday to build a research station on the Moon.

The agreement was reached between Zhang Kejian, head of the China National Space Administration (CNSA), and Dmitry Rogozin, general director of Roscosmos at a virtual ceremony.

The plan is to build an "International Lunar Research Station (ILRS)" to carry out experiments and exploration. The project is open to participation by "all interested countries and international partners".

CNSA commented in a press release: "China and Russia will use their accumulated experience in space science, research and development and use of space equipment and space technology to jointly develop a road map for the construction of an international lunar scientific research station."

The SpaceNews website comments that the base would probably be constructed at the south pole, an area that contains ice, making it the most attractive area for human habitation. The plan is to staff the laboratory with robots and autonomous machines at first, but these may be joined by humans at a later date. Â

Bleddyn Bowen, a lecturer in international relations at the University of Leicester, told SpaceNews that the agreement fitted "the larger trend, which is Russia moving into a closer orbit with China". 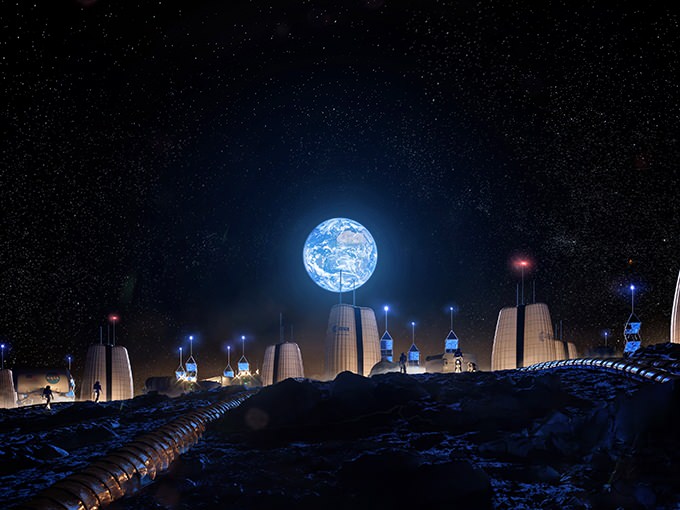 A rendering of a possible lunar village by US architect Skidmore, Owings and Merrill and architecture visualisation studio Slashcube

Chen Lan, an analyst who specialises in China’s space programme, told the AFP news agency that the project was a "big deal". He said: "This will be the largest international space cooperation project for China, so it’s significant."

China and Russia have previously signed agreements for cooperation on the Chang’e-7 and Luna 27 missions and a joint data centre for lunar and deep space exploration.

The European Space Agency has also been involved in discussions on lunar exploration, and recently signed a memorandum of understanding with NASA on the Gateway project.

Karl Bergquist, ESA’s international relations administrator, told SpaceNews last year: "At ESA we are following the Chinese lunar exploration plans very closely in order to see where our respective programmatic interest could meet, primarily the Chang’e-6, 7 and 8 missions but also the ILRS initiative."

Russia is preparing to launch its Luna 25, Luna 26 and Luna 27 lunar lander missions across the 2020s.