Could carbon reinforcement stop concrete being the climate bad guy?

Early next year sees the completion of a special little building in Dresden that could signal the shift of concrete’s status as villain in the climate crisis to friend.

The most widely used building material on Earth, concrete is responsible for emitting vast amounts of CO2 owing to the production of cement, which accounts for between 6-8% of global CO2 emissions, some three times the amount emitted by aviation.

The building being constructed now on the campus of Dresden University of Technology (TU Dresden), called the Cube, will be almost completely built with a new type of concrete that is reinforced by carbon mesh instead of steel. It will be the first building of its kind in the world.

Despite its diminutive footprint – its floor area is 220 sq m – the Cube is a big deal. Part exhibition space and part test rig, it will be the showcase project of the C3-Network, a consortium of some 160 companies and research organisations intent on developing carbon reinforced concrete (‘carbon concrete’, for simplicity here). It is the biggest construction research project in Germany right now, led by TU Dresden and funded by the German government and hefty joining fees for consortium members. Furthermore, as an inert material, carbon does not corrode, whereas steel does. That means you don’t have to put extra centimetres of concrete onto a plate or beam to protect its reinforcement from the elements. It also means structures last far longer, 200 years or more, and are easier to maintain.

Could it spark a sustainability revolution in construction? To find out, GCR spoke to Prof Manfred Curbach, Director of the Institute for Concrete Structures in the Faculty of Civil Engineering at TU Dresden, and leader of the C3 research project. Curbach has researched textile-reinforced concrete since 1994, and the Cube is the beginning of the culmination of that work. He believes carbon concrete will dislodge steel-reinforced concrete as the default choice for buildings and infrastructure in Germany soon.

“I think we’re just at that moment when you know the exponential curve is getting steeper and steeper,” he said. “It took us 25 years to do the basic research, and the last 10 years to convince companies and authorities that it’s a very safe material. The Cube is made completely of carbon concrete, but others will follow now because it is spreading.”

Designed by Henn Architekten, the Cube will display the lightness and flexibility that carbon concrete offers. Its signature feature is a covering of two, interlocking, 30-metre-long concrete panels that start as walls and then twist horizontally 45 degrees midway to finish as roof. Each panel is a kind of club sandwich with three separate concrete sheets, two 3cm thick and the exterior weather shell 4cm thick, with a layer of EPS insulation and one of XPS insulation in between, giving a total thickness of 44cm. These panels will be shotcreted onto formwork in situ in the autumn of this year. 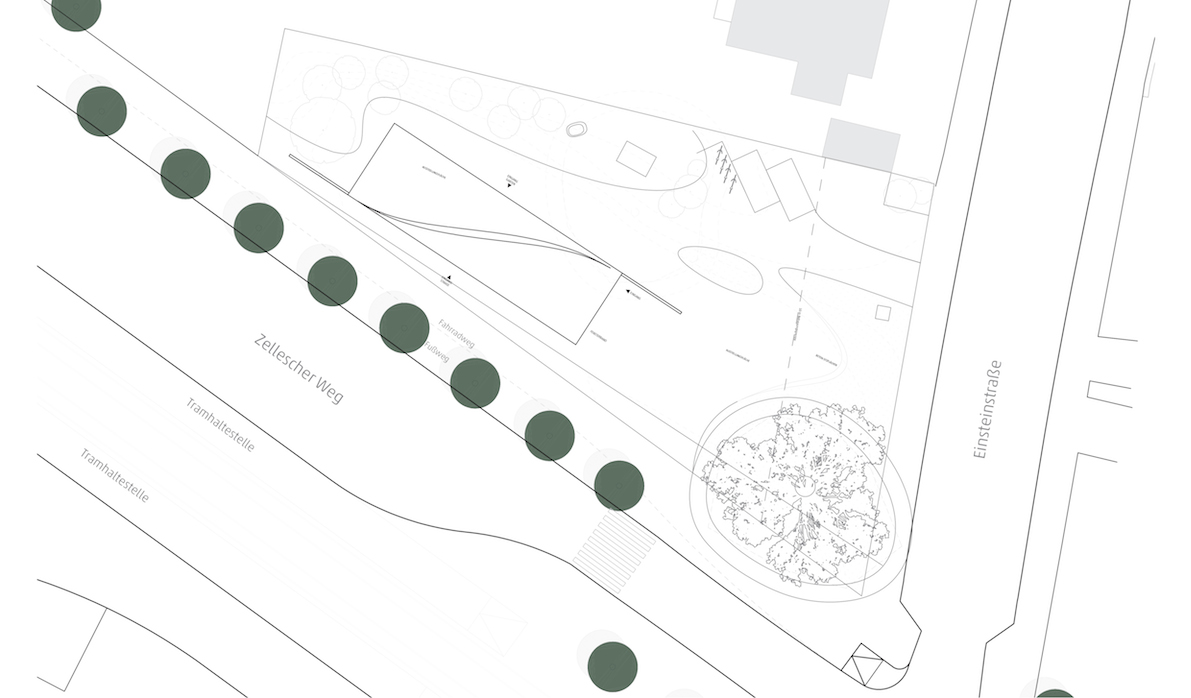 Under these wings, and already complete, is the Box, a rectangular building-in-a-building also constructed with carbon concrete. Walls comprise two precast external sheets 4cm thick with a layer of insulation and one of poured concrete in the space between, giving a total thickness of 24cm. As with the panels, the mass of the box is at least 50% less than what would be required with steel-reinforcement.

“If you have steel,” Curbach said, “you need about 3cm, 4cm or 5cm cover to protect the steel from corrosion. Carbon is non-corrosive; it is, really, inert. So we only need the cover which is able to transfer the stresses, the forces between the reinforcement and the concrete, and in this case it’s about 5mm. And that’s the main reason we can reduce the volume.”

In the coming years, the elements of the Box in particular will be monitored for their performance.

Could buildings be forever?

Due for completion in spring 2022, the Cube will be a visually-arresting emblem of carbon concrete’s arrival, but the technique is already being used more widely in ways that have major implications in the climate crisis.

One is the rehabilitation of old steel-reinforced concrete buildings. Curbach opposes the wanton demolition of old buildings to make way for new ones because it intensifies both emissions and the extraction of raw materials. “The best solution is to work with the buildings we have for as long as possible,” he said. “Every building we do not demolish prevents a new building.” Buildings lose their loading capacity with age, and intervening to restore that capacity with more conventional concrete is difficult. However, such is carbon concrete’s strength that a one-centimetre-thick layer of it is enough to double the bending resistance of a plate, Curbach said. This very thing was done on the old headquarters of his own institute, the Beyer-Bau Building on TU Dresden’s campus. Completed in 1913, it is one of the city’s oldest steel-reinforced concrete buildings.

There are many such historic buildings in Germany, which is why the country’s heritage authorities are interested in carbon concrete. “It means you can save old buildings without changing their geometry. A one-centimetre layer will not be noticed,” he said. The reinforcement process involved roughening the old plate’s surface by shotcreting, then wetting it with water, then spraying an initial 5mm layer of carbon concrete. The carbon mesh matting is then pushed into that fresh concrete, and the second 5mm layer is sprayed on top. “The bond between the old concrete and the new is very, very good because the roughening and the water makes a good fusion between the two,” said Curbach.

Another application is bridge rehabilitation. A number of footbridges have been built with carbon concrete and the first all-carbon-concrete road bridge able to carry vehicles is being built 50km east of Dresden in Bautzen.

But authorities will be more immediately interested in its ability to strengthen existing bridges. So far, two 1960s-era, three-span motorway bridges near Frankfurt have been strengthened with the technique after they showed signs of stress-induced corrosion. “These required six layers, but it was so successful we’re now strengthening a third,” Curbach said. 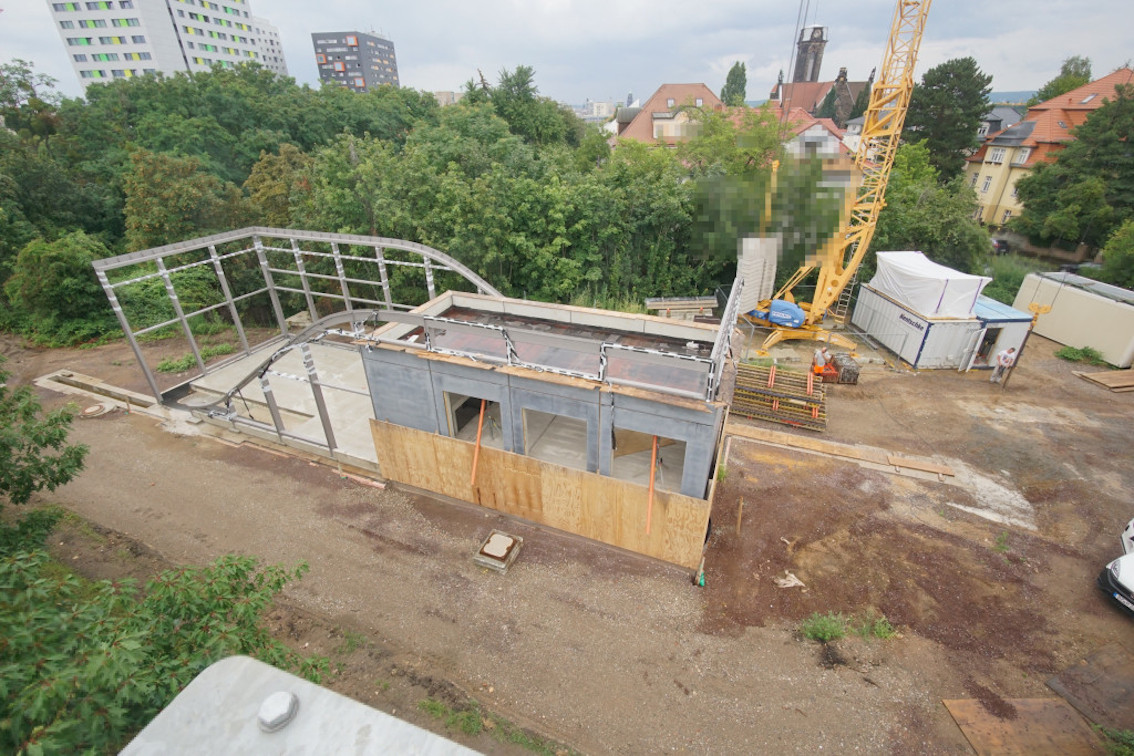 Cube construction site, with the Box complete, on 5 August 2021 (Courtesy of TU Dresden)

Carbon concrete structures like the Cube tend to favour precast elements as opposed to pouring on site. This could change, but equally, Curbach believes that infrastructure design could embrace precast elements more fully. He envisages bridges built with standardised precast components that can be disassembled and used elsewhere, given carbon concrete’s strength and durability, which would reduce even further the volume of concrete ultimately produced.

“The concrete we use has a small maximum size of aggregate of between 2mm and 8mm, so you have a very small amount of pores. That makes its durability against chemical and other attacks higher than for normal concrete, so we’re talking about 200 years that it can be used without any problems,” he said.

To date, carbon concrete has been incorporated into some 130 structures in eight countries, according to Curbach. One thing preventing its wider take-up is the lack of its own building code, which means any project using it must obtain special approval.

However, the C3-Network is drafting the code now, covering all carbon concrete applications, with the aim of publishing it by the end of the year for debate and adoption. Curbach expects this to happen quickly given the robustness of the research, the fast-growing volume of successful applications, and the fact that relevant government bodies have been involved in the code’s drafting. “I think everybody wants to finish it,” he said. Prof Manfred Curbach, Director of the Institute for Concrete Structures at TU Dresden and leader of the C3 research project (Photograph by Stefan Gröschel)

This is why he believes carbon concrete will begin replacing steel-reinforced concrete even if the latter doesn’t disappear altogether. The cost is estimated to be some 20 times higher than conventional concrete, but the reduced volumes required and lower lifetime costs need to be factored in.

Then there is the growing pressure on governments to show they are serious about meeting their net zero commitments. In May, the German government raised eyebrows with an ambitious new goal of reaching net zero by 2045, providing more incentive for federal and local governments to support carbon concrete’s development, and even to mandate its use.