A scientist working for the Dutch government is to propose building two immense dams to enclose the North Sea and protect some 25 million Europeans from the rising sea levels.

One dam would be between Scotland and Norway, with the other between France and Cornwall, England.

Sjoerd Groeskamp, an oceanographer at the Royal Netherlands Institute for Sea Research, will propose the Northern European Enclosure Dams – or NEED – in a paper to be published later this month in the American Journal of Meteorology.

He said that without such a drastic measure, much of London and a third of the Netherlands would be under water.

The Scotland-Norway dam would cover 475km, and the France-England one 160km.

Despite the size of these structures, Groeskamp said the idea was technically feasible. "We build oil platforms in deep seas, so why not dams?" he said, speaking of the northern structure.

"The deepest part is off the coast of Norway, and is more than 300m deep. That is not an insurmountable problem. It is also affordable. If we extrapolate the realized costs for large water works, we come to a cost item of €300bn to €500bn. That is only 0.1% of the GDP of the 15 countries that would be protected by such a dam against rising sea levels." 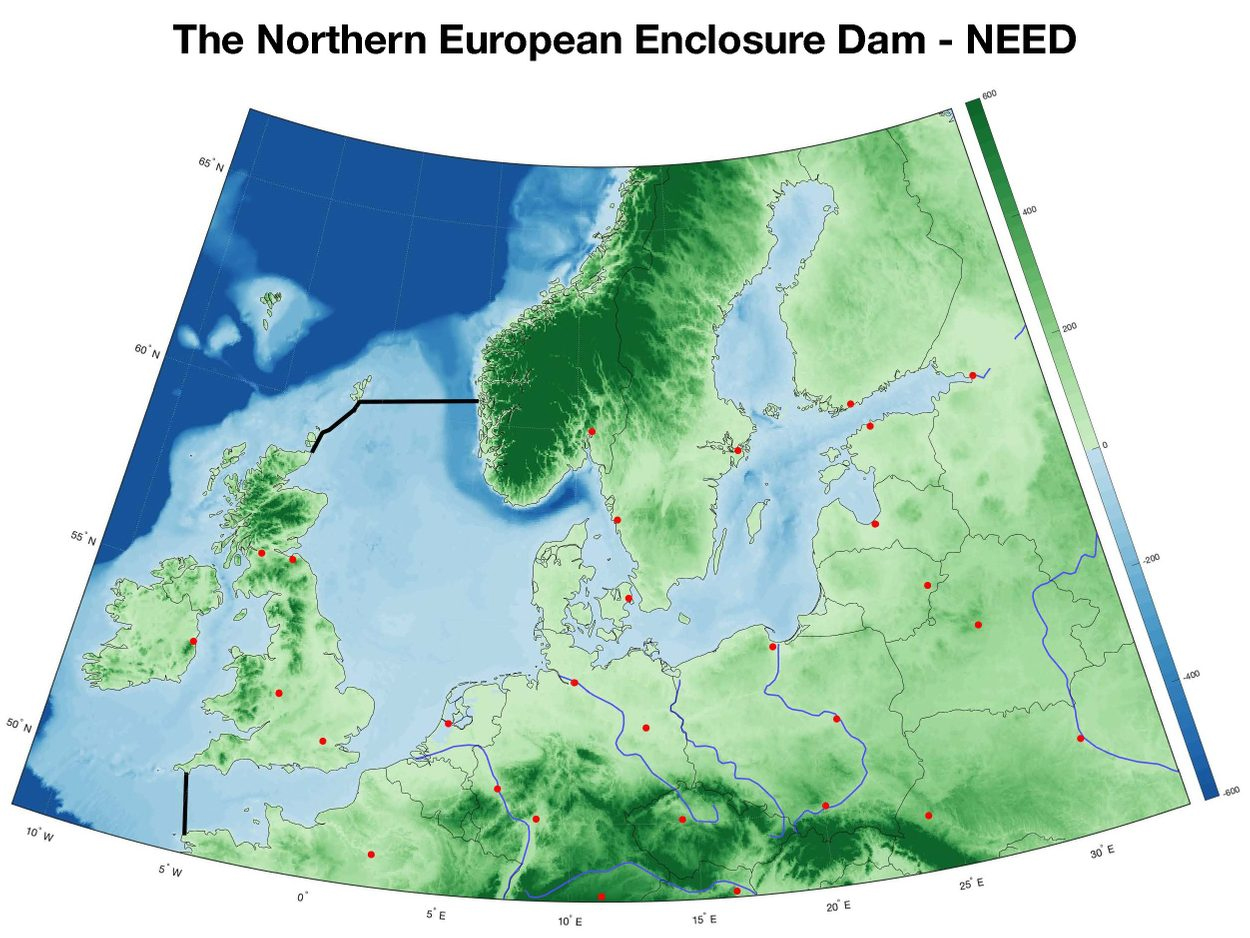 Where the dams would be built (Sjoerd Groeskamp)

The southern dam may have a cost of around $250bn.

Nevertheless, he added that he was putting forward the proposal more "as a warning of the immensity of the problem hanging over our heads" than as a practical suggestion. He said: "‘It shows what solutions we will need if we are unable to do something about climate change."

Based on existing projects, Groeskamp and colleagues put the cost of building a so-called North Sea Enclosure Dyke at between €250bn and €500bn. Spread over 20 years, the annual cost to the 14 countries that would be protected by it would amount to just over 0.1% of their combined GDP, they calculate.

Were this plan ever to go ahead, it would have obvious implications for shipping. It would also have the consequence of turning the North Sea into a lake, with consequences for the fishing industry and the myriad ecosystems in the sea, coast and rivers of northwestern Europe. Â

Groeskamp points out that the costs and the environmental and economic impact of NEED have to be set against the consequences of doing nothing, and suffering the effects of rising sea levels: the worst-case scenario is a rise of 10m by 2050.

The consequences would be serious for all the counties with a North Sea coast – much of London and East Anglia would disappear – but particularly serious for the Netherlands, one-third of which is below the present level of the North Sea.

The average rate of sea level rise over the period 1993-2018, when satellite measurements have been available, has been around 3.3mm/year.

Top image: The dams would follow the example of the Netherlands’ Afsluitdijk, which dammed the Zuiderzee inlet (Dreamstime)

Is the notion of the "ultra project" really dead?