Despair, bankers and glimmers of hope in submarine art gallery off the Canaries

A British artist has begun a two-year project to create an underwater art gallery off the coast of Lanzarote, the easternmost of Spain’s Canary Islands.

The $875,000 Museo Atlántico project will be populated by artworks created by Jason deCaires Taylor, most of them made up of human figures created using concrete casts of local people, and tourists, and installed 14m below the sea.

The sculptures deal with a wide variety of ecological, political and philosophical subjects. 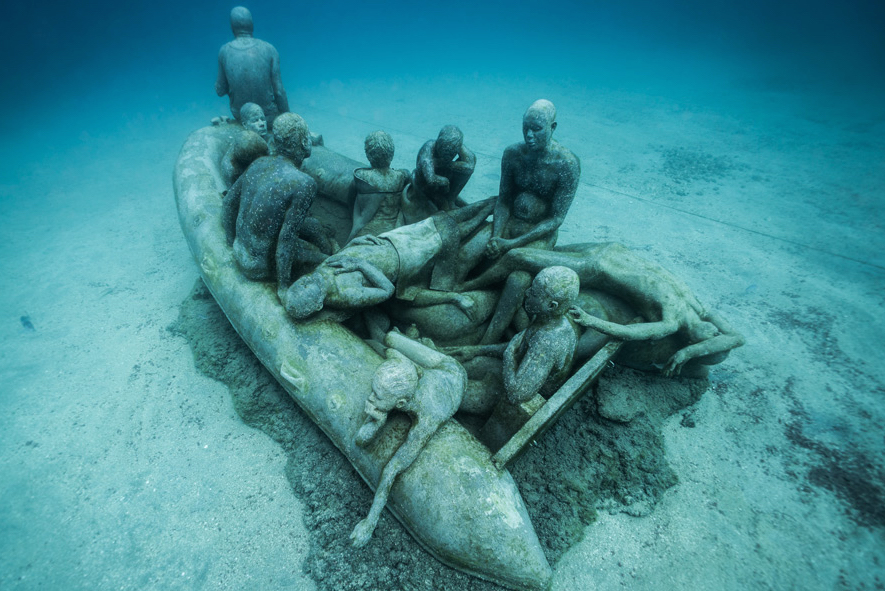 The Raft of the Lampedusa, above, uses an allusion to Théodore Géricault’s Raft of the Medusa to depict the plight of migrants attempting to cross the Mediterranean in flimsy vessels.

The contemporary reference is to a boat that sank off the Italian island of Lampedusa in 2013, drowning an estimated 360 Eritrean, Somalian and Ghanaian migrants.

In The Rubicon, above, commuters walk towards an abyss with eyes closed or glued to smartphones. 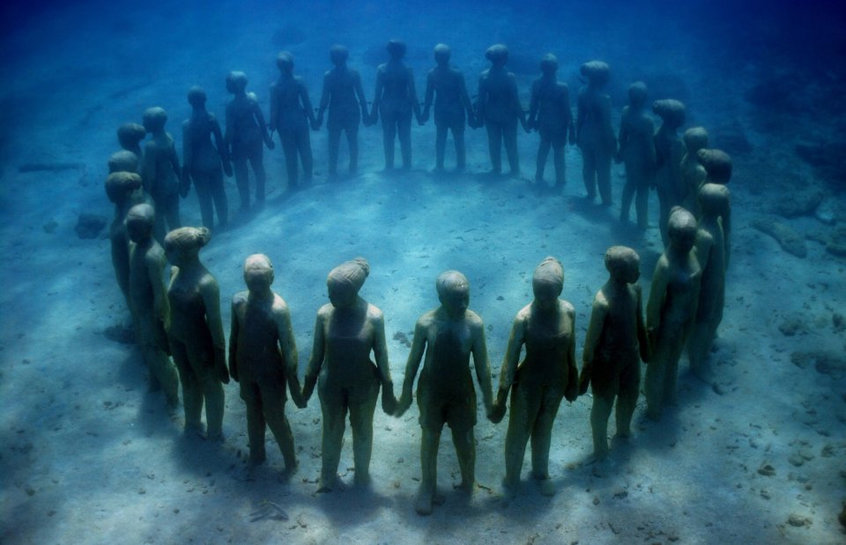 The despair of The Rubicon is balanced by this depiction of social solidarity in Viccisitudes. 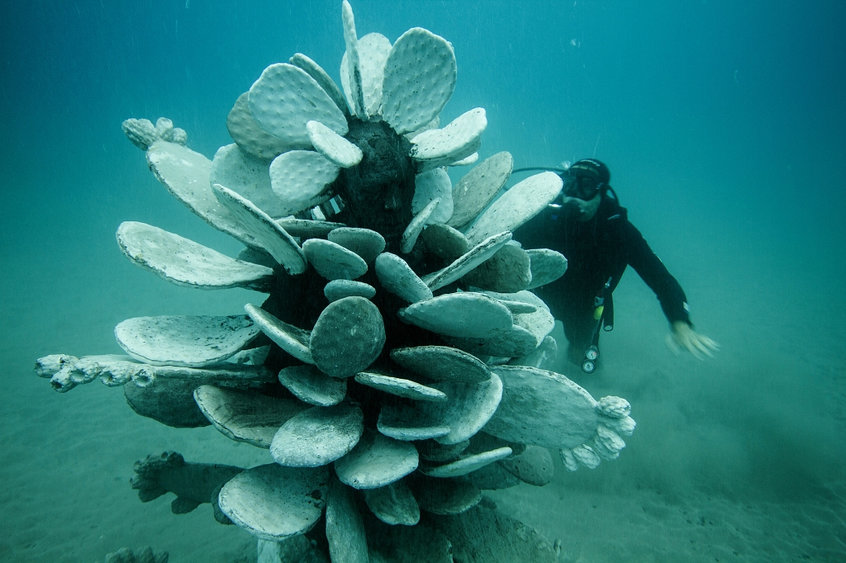 Other works toy with nature to add an extra level of strangeness.

The artist and his team of five have previously created submarine artworks off the coast of Grenada in the Caribbean, CancÃºn in Mexico and the Thames in London. 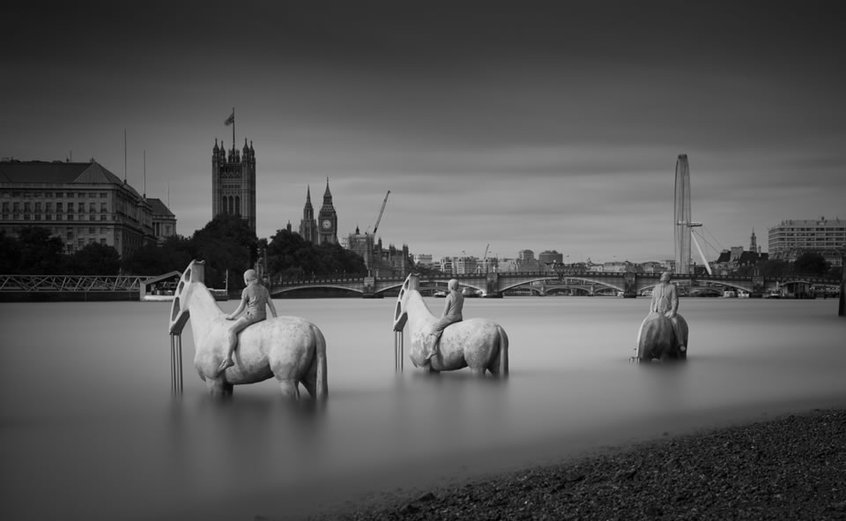 As with Museo Atlantica, the subjects deal with large themes, including rises in sea levels caused by global warming… 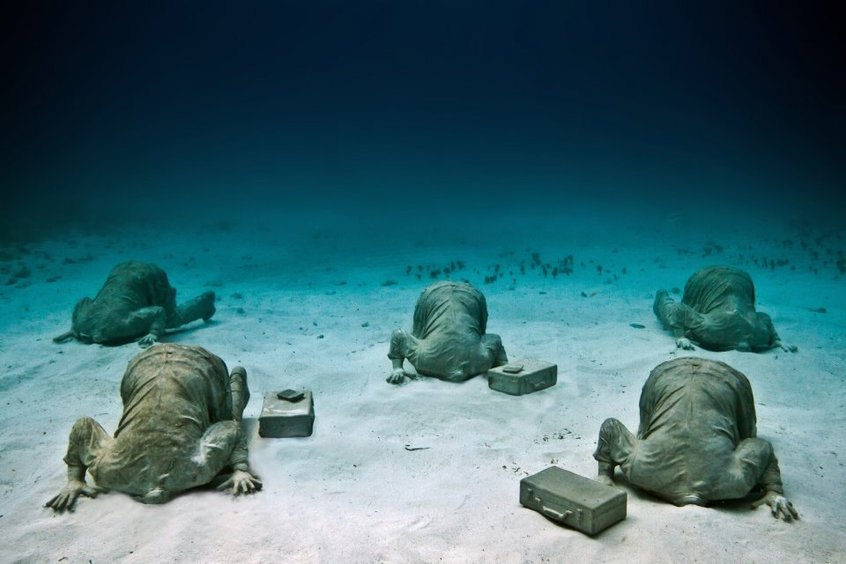 The Lanzarote museum will hold 10 installations when complete in early 2017. It is located off the resort of Playa Blanca, and can be viewed by scuba divers, snorklers and the passengers of a glass-bottomed boat.

Taylor told GCR that the logistics of placing the cement statues, which can be as heavy as 40 tonnes, required the use of foundation plates, anchoring systems and pick-up points. However, he added that the greatest challenge was to obtain regulatory approval.

"The Thames has got this strange law that when the tide is high the Port of London Authority has control over it, and when it’s low tide, Lambeth council owns the space," he said.

"So different authorities have jurisdiction at different times of the day, and one wouldn’t sign off before the other one did. In the end they both signed on the same day. And that’s the easy part. Working in Spain is 10 times harder. It took us two years to get the permits for Lanzarote."

Taylor’s present project at the sculpture garden to build a 30-m-long, 4-m-high underwater wall with a gate that symbolised the point of no return with respect to climate change.

Once the Lanzarote scheme is complete, Taylor and his team have five years’ worth of projects in the pipeline.

"We have some big projects, but we haven’t signed in blood yet so I can’t say too much.

"The next designs are much more ambitious, much larger pieces, and we’ll be looking at the Mediterranean and the Pacific. Some of them will be half submerged and act as breakwaters, some will be large buildings with actual galleries."

Sculptures and photography by Jason deCaires Taylor. Click here for more photographs of the artist’s other projects.