DSC Saudi Arabia will oversee and undertake all aspects of construction works on the project, with Drake & Scull International (DSI) KSA assigned to MEP works.

The Lamar Towers project was initially launched in 2007, but was halted in 2009.

The project was restructured and refinanced in 2013, attracting regional and international investors while a new development company was assigned to manage the project with DSI appointed as the main contractor. 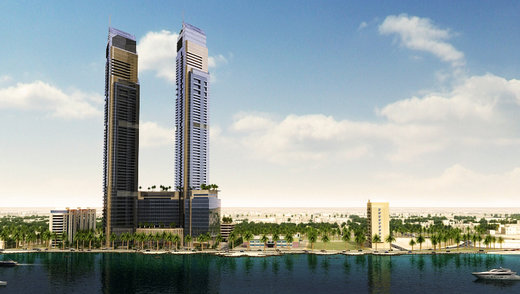 The Lamar Towers project was initially launched in 2007, but was halted in 2009.

The Lamar Towers project occupies a 34,800-sq-m plot with a total built up area of 409,770 square metres on Jeddah Corniche, and comprises two-high rise towers sitting atop a 13-floor curved podium.

Residential and commercial towers T1 and T2 measure 322 meters and 293 meters in height and comprise 57 and 49 storeys respectively.

Completion is expected in the fourth quarter of 2015, and will offer stylish housing and premises for international companies, DSC said.