Office in Waterloo, Ontario set to be Canada’s greenest building

Impressed by its use of geothermal energy, a solar wall and other features, the Canada Green Building Council has just awarded its first zero carbon certificate to a 9,300 sq m, triple-glazed office in Waterloo, Ontario.

When complete the Evolv1 building should produce more energy than it consumes, if the design performs as intended.

One member of the hard-to-please public criticised the size of its car park, however, but the developer said even that had good, green credentials (explained below).

Developed by the Cora Group, a local office specialist, the Evolv1 complex in Waterloo’s David Johnston Research + Technology Park will have accountant EY as the anchor tenant.

It is one of 16 projects across the country selected by council to participate in a two-year pilot of its Zero Carbon standard.

To receive the certification, Evolv1 demonstrated that it had computer models showing a zero carbon balance over the year, that it had suitably efficient envelope and ventilation system, and onsite renewable energy systems capable of providing at least 5% of building energy consumption. 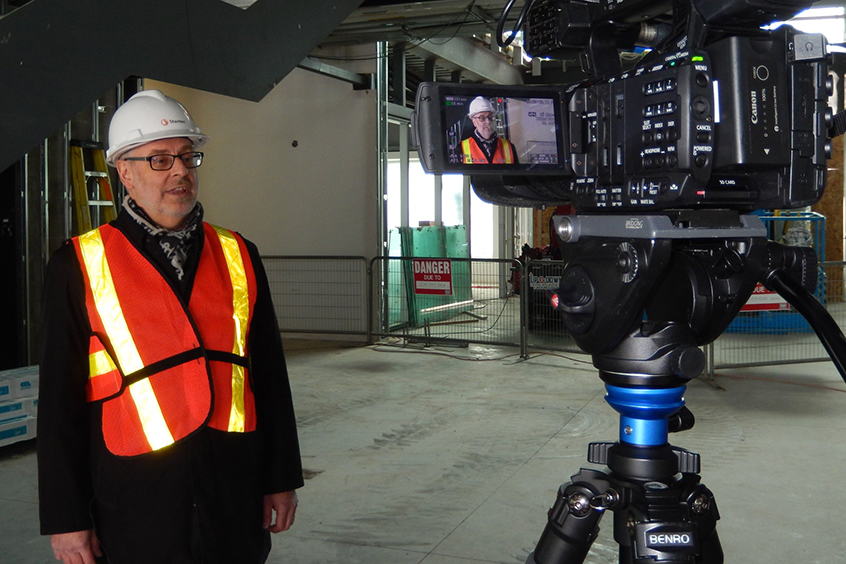 The building was designed and engineered by Stantec, and constructed by Melloul Blamey.

Richard Williams, principal with Stantec (pictured), commented: "We are proud of how Evolv1 expands the definition of sustainability. This project advances the business case and economic model for sustainable design in a multi-tenant building. It is a building that supports human health and wellness, important characteristics for today’s premiere tenants and their employees."

Adrian Conrad, the chief operating officer of Cora Group, added: "This has been a building several years in the imagining, planning, and making. It is the result of a collaborative effort by The Cora Group, our design partner Stantec, and our many stakeholders. We firmly believe Evolv1 sets a new benchmark for green building design and construction."

The announcement did provoke one nit-pick from Twitter-user Mike Boos, who commented: "There’s no good reason to have that much parking right next to a light rail stop and the Trans Canada Trail."

To that criticism, Cora Group replied that it had installed 28 electric vehicle chargers, secure bike storage and that "most parking is located under solar panels".