A German energy company has announced plans to turn a disused salt mine into the world’s largest battery. If it works, Ewe Gasspeicher will create a 700MWh battery – enough electricity storage to power 75,000 homes for a day.

The "brine4power" project, being developed in collaboration with the University of Jena in central Germany, uses the "redox flow" principle to store and generate energy.

The system developed by Ewe and its collaborators uses salt water and plastic, rather than the combination of heavy metals and sulfuric acid that make up the traditional redox battery. Ewe says its invention is a "green megabattery for green energy".

Ralf Riekenberg, the Ewe manager who is heading the brine4power project, said: "We have yet to carry out some tests and clarify some questions, however, I assume that we may have a cavern battery in operation at the end of 2023."

The company already has two gas storage caverns with a volume greater than 100,000 cubic metres in northern Germany that could be used for a redox battery. The facility at Jemgum, near Emden on the German-Dutch border, has been earmarked for the first battery.

Once built the batteries would be used to increase the stability of the German grid, thereby allowing it to accept a higher percentage of intermittent generators.

The battery consists of two storage tanks containing electrolyte solutions and a third where they can be brought together with a membrane to separate them. 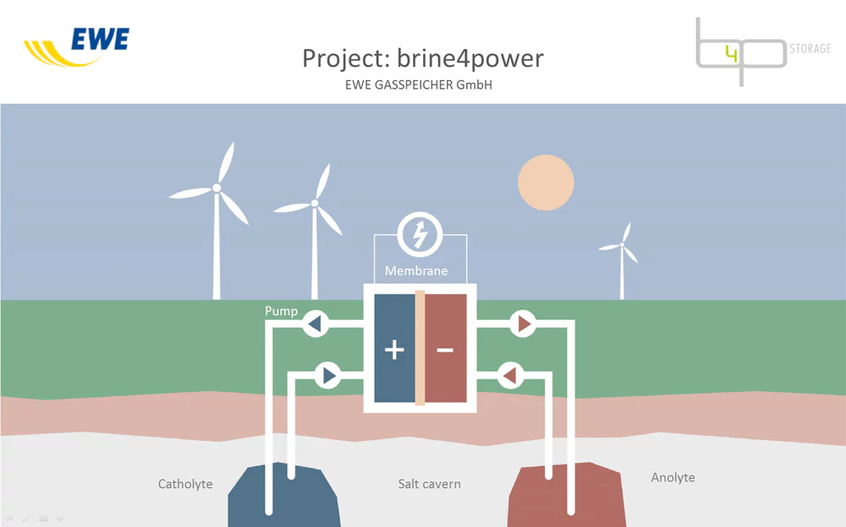 The idea is to pass a current through the liquids from a renewable energy source. When this happens, one of the tanks becomes negatively charged and the other positively. When the two are brought into the mixing chamber, the negatively charged liquid releases electrons, which can be sent down a circuit to do useful work, before being accepted by the positive tank.

The chemical reactions involved in this process are reduction and oxidisation, which give the circuit its name.Â

In principle, the capacity of the battery is only limited by the size of the two tanks

The news comes after US electric carmaker Tesla was chosen by the government of South Australia to build the world’s largest lithium ion battery, which has a storage capacity of 129MWh.

Top image: Ewe’s gas storage facility at Jemgum, where the first battery will be built (Ewe)