The "wonderful and frightening" rise of the world’s middle classes is pushing us towards a resource crunch, warns the UK’s top climate diplomat, and we must act now with better urban and economic planning. David Rogers reports.

Sir David King, the UK’s former chief scientific adviser and now the Foreign Office’s Special Representative forÂ Climate Change, has warned that cities face a slew of problems caused, ultimately, by global industrial development and the rise of a new middle class in the developing world.

Business people, academics, politicians and NGOs have no time to lose in designing urban planning solutions to the problems before they "fester and wound" societies around the globe, he said.

The main problem is not population growth, King said, because the world’s average birth rate has fallen to 2.2 children for every woman, while 2.1 leads to a stable population.

Instead, the problem is the rise of a global middle class, which he defined as people who spend between $10 and $100 a day. That rise is happening at a "wonderful and frightening rate", King told a conference on sustainable cities at the University of Reading on Tuesday.

"So preparing for a world with this number of urban middle class consumers in a short space of time is a challenge that the world has never faced before – and it’s coming at us at the same time as the demographic pressure has created a whole series of other challenges."

Humans have become a predominantly urban species in the past six years. In 2008, out of the 6.5 billion people on the planet, half were living in cities. By 2050, 70% of 9 billion will live in vast city regions. "Almost all of this growth is occurring in Asia Pacific, where 95% of the new middle class are, with Africa coming along rapidly behind," King said. "This is where urban development is going to be happening at a rate that we’ve never seen before."

It’s a challenge, he said, but also an opportunity – one that’s "going by in a flash".

"If we don’t turn it into an opportunity we’re going to allow a whole range of problems to fester and wound the development of societies around the world."

The challenge is that rising global demand puts pressure on energy, raw materials, food and water.

Commodity prices today are higher in real terms that they have been for a long time – two-and-a-half times higher than they were in the 1980s, he said.

"Resources that are already stressed delivering to 1 billion middle class people are soon going to have to deliver to 5 billion," he said.

Middle class people eat more meat, for example, and King said it takes 12,000 litres of fresh water to produce one kilogram of beef. (The Water Footprint Network puts that estimate at more than 15,000 litres.)

This is coming on top of increasing water scarcity: King cited the 14 year drought in south Australia that is placing Melbourne under greater water stress.

Thirsty Beijing, meanwhile, is planning to build a $1bn desalination plant 270km away on the coast which will supply a third of the Chinese capital’s daily water needs, state media have reported.

Meanwhile, politicians respond poorly to the challenges, he said.

"You could say, let’s deal with water shortage by converting sea water into fresh water, but that’s an energy intensive process. 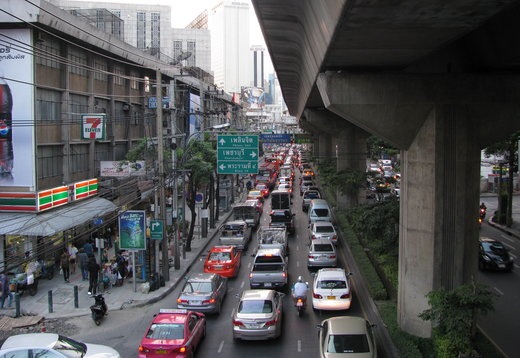 "If you turn sea water into fresh water in Australia you use coal, and in the Middle East you use oil, because it has a subsidised price of $5 a barrel. It so happens that every country that has a shortage of water also has a surfeit of sunlight, but no country is using sunlight to make fresh water."

He gave the example of car use, which is encouraged by low density urban development. Developing countries had to resist being "seduced by [the] Hollywood image of people in big cars driving all over the place".

Planners should also push for mixed use. "The notion of dividing cities up into an area for business and an area for housing has to be put into the box marked ‘the Devil’," he said. "We have to avoid the attraction of every individual jumping into their car every day and saying ‘I’m off to work’."

Bogotá, Colombia, was a shining beacon of good policy, he said. There, Enrique Peñalosa, mayor between 1998 and 2001, waged a policy war on cars.

When he was elected there was a proposal to spend $5bn on elevated highways while, at the time, the city’s bus service was disorganised and run by competing companies.

Peñalosa and later mayors brought the bus service under city control, created exclusive bus lanes and built new terminals and stations. Now, the city’s "TransMilenio" is considered the global gold standard in bus rapid transit systems. It, plus new cycle paths and walkways, have put cars to the back of the queue in Bogotá.

"Transformation doesn’t necessarily require technology or finance," King said, "but it does require vision and the ability for a political figure to carry it through."

He added that, in the UK, a similar aim could be fulfilled by high speed rail, as the UK train network was at "saturation point", and the controversial HS2 and 3 would be the biggest single advance in inter-city travel since the Victorian era. 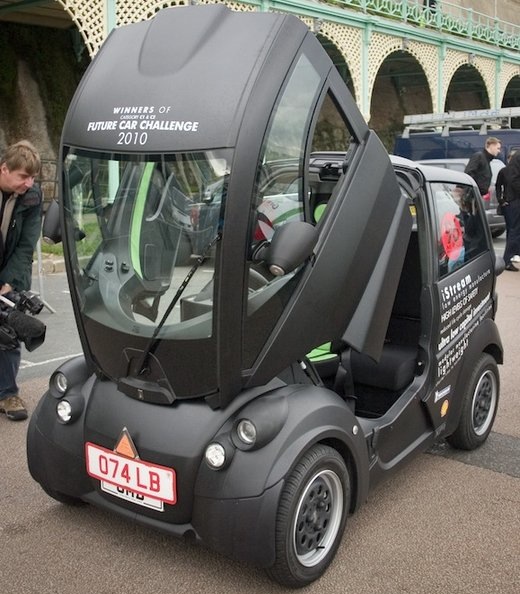 Gordon Murray’s design for a plastic car: the chassis can be made in less than a minute (Gordon Murray Design)

"The argument that we can already get to Birmingham pretty quickly is not the main point," he said. "The main point is to add passenger miles to the system."

Going round in circles

King added that future societies would have to embrace "circular" economic models, in which all waste is raw material.

"The linear economy of the 20th century was based on taking material out of the ground and turning it into a commodity and then putting it back in the ground," he said.

"The circular economy has to be the better way forward. Every manufactured good in the future should be made so that it can be remanufactured."

"The Chinese Communist Party," he added, "has built this circular economy into its list of objectives."

A good example, he said, is the plastic car created by UK designer Gordon Murray. The chassis of his T25 model can be moulded in 52 seconds.

"It’s one piece of plastic with no boltsâ€”the average car has 1,500 bolts," he said. "Drop in an engine and you drive off in five-and-a-half minutes."

Even human waste needs to be seen as valuable, he insisted.

"New Yorkers generate 1 million kilograms of solid waste a day, one percent of which is phosphates and nitrates that can be readily extractedâ€”both are energy intensive to make and phosphates are becoming scarce and expensive. Yet it is all dumped at sea, as it is in every other city."

And his warning over the rise of the global middle classes echoes his successor in the post of UK chief scientific advisor, John Beddington, who, in 2009, warned of "perfect storm" of food, water and energy resources unleashing unrest and and conflicts in vulnerable parts of the world.

It’s not clear, however, what influence such calls will have.

In September last year, King was named the foreign secretary’s special representatives on climate change, which gives him a role in shaping the UK’s diplomatic policy as it relates to climate change and low-carbon growth.

He is also the chair of the Future Cities Catapult organisation, set up by the Department for Business, Innovation and Skills last year with funding of Â£150m. It brings together government, business and universities to find ways of stimulating business opportunities around the need for resource efficiency and quality of life in cities.

If, as King maintains, the political vision to tackle the resource crunch is everywhere lacking, we might hope that business will lead the way.