One of the world’s most famous prehistoric sites, Stonehenge, is set to enjoy peace and quiet again after the UK government backed a £1.6bn plan to put the busy highway running next to it underground.

Since 1933 visitors hoping to experience the mysteries of the ancient site in Wiltshire, England have had to contend with noise and fumes from the busy A303 trunk road passing close by, a major artery running from Basingstoke to Devon.

But today after a consultation begun in March the government has given its blessing to a plan for a tunnel at least 2.9km long (1.8 miles) that will channel lorries and cars underground.

Influential heritage groups cautiously welcomed the plan, which moves a tunnel entrance further away, but other campaigners expressed "shock" and called for a "complete re-think" of the issue.

As well as restoring tranquility for a million visitors a year, the infrastructure scheme will reconnect the two halves of the 6,500-acre World Heritage site currently split by the road, and remove the sight and sound of traffic from the Stonehenge landscape.

Claiming a win-win for all, the government said the tunnel, which widens the section to four lanes, is part of a new southwest "expressway" that will help the economy and ease congestion in the region by linking the M3 and M5 motorways.

Plans for a tunnel were first tabled in 1995 but have been bedevilled by concerns over cost and visual impacts. 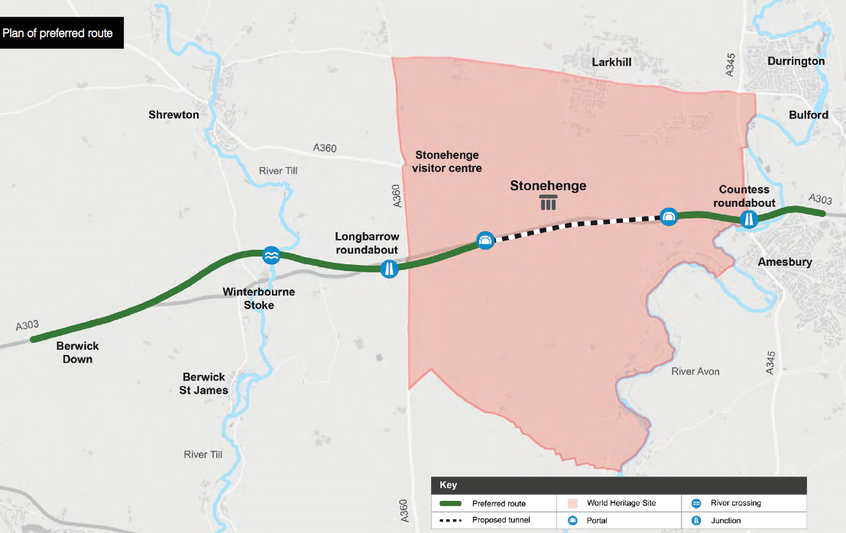 The current plans were subject to a consultation which gathered submissions from 9,000 people and organisations, the government said.

As a result Highways England modified the route by moving an entrance to the tunnel 50m further away to avoid intruding on the view of the setting sun from Stonehenge during the winter solstice.

The change drew cautious welcome from three influential heritage organisations, Historic England, the National Trust and English Heritage, who said today in a joint statement: "We welcome the amended route and believe it can, if designed and located with the utmost care, deliver a lasting legacy for the World Heritage Site and restore peace and tranquillity to the Stonehenge landscape."

Not everyone is happy, however. Campaign group Stonehenge Alliance is organising a petition against the scheme, saying it will "cause severe and permanent damage to the archaeological landscape of the World Heritage Site (WHS) in direct conflict with international advice to the UK Government earlier this year". The group objects to the "huge expense", which has been increased by £200m.

Also objecting is Campaign for Better Transport, on similar grounds. "The project needs a complete re-think, not a minor tweak which still threatens major harm to this iconic landscape," said spokesperson Kate Fielden.

Work is expected to start in 2021, the BBC reported.

Top image: Traffic on the A303 visible from Stonehenge (Department of Transport)