What investors should know The ongoing protests across Brazil have marked an important reality check in a country that was deemed protected from the global economic crisis.

The trigger – transport and infrastructure spending – was a prime example of just how far Brazil is from the utopia of vibrancy and growth that gets portrayed as the WorId Cup and Latin America’s first Olympics Games approach.

The fact is, the majority of the population are simply left out of the picture.

Let’s not discard the positives. Brazil does have massive natural resource wealth, notably oil and gas.

Unemployment is at historically low levels and an estimated 40 million people have been lifted out of extreme poverty in the last decade.

But Brazil is still in the top 10 highest wealth divided countries and, at the same time, people pay high taxes – 36% of GDP – so it’s no surprise that such pluses are not yet felt to be enough.

The government is quick to respond that initiatives such as the Growth Acceleration Program (PAC), and schemes like Minha Casa, Minha Vida and Bolsa FamÃ­lia are making a real difference to people’s lives.

These programs are steps in the right direction, but deeper reforms are necessary.

Perhaps the biggest problem is the hazy relationship between the private and public sectors. 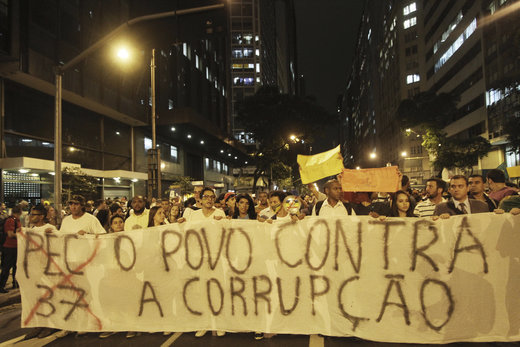 Money is often allocated to schemes because their proponents have the right political connections, not because the ideas are good and the proponents are the best for the job.

The result is delays and white elephants. The country’s north-south railroad, planned since 1987, is an example of the former, while any number of ill-conceived low-income housing projects, located far from where people might actually wish to live, illustrate the latter.

It’s no wonder there is so much pent-up frustration.

As President Dilma Rousseff begins her re-election campaign, the question remains: with all this money circulating, how come the country still suffers from poor housing, education and health services, and the effects of corruption?

The Twitter hash tag stating "the people have woken up" has affirmed a sentiment that the Brazilian public now want proper answers – not fluffy excuses.

For investors, bringing such issues out into the open and showing what is actually going on can only be a good thing.

Based in Brazil, Ruban Selvanayagam is a developer and investment adviser at Fez Tá Pronto construction systemï»¿