Dubai firefighters may use jetpacks for towering infernos

Dubai is gearing up to order 20 "jetpacks" for its firefighters so they can combat blazes in towers where ladders and helicopters can’t reach.

Sometimes, in fires, people go to the top of the building. You cannot always get ladders there, and you cannot always use the elevators– Ali Hassan Almutawa, Dubai Civil Defence Operations Department

New Zealand aerospace firm Martin Aircraft Company would supply the jetpacks, according to a memorandum of understanding signed with the emirate’s Civil Defence Directorate at the Dubai Air Show on 9 November.

"Dubai is one of the fastest growing future cities in the world with its modern skyscrapers and vast infrastructure it has always been a world leader in adapting new technology to improve and save people’s lives," said Ali Hassan Almutawa, director of operations at the directorate.

He told the BBC that the jetpacks could also be used to pluck people off the top of burning buildings.

The jetpacks are somewhat misnamed, as they are actually powered by 200HP fans, which give them a vertical ascent speed of 74km/h.

They are capable of 45 minutes of flight before refuelling and can fly up to 1km in the air – high enough to intervene in the Burj Khalifa.

The are made from carbon fibre manufactured using 3D printing technology. 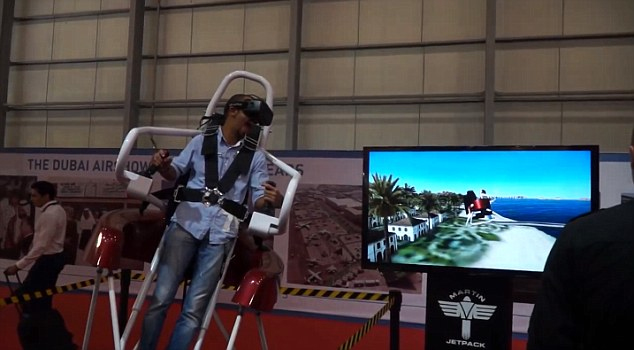 Martin claims its jetpack will be as disruptive a technology as the helicopter because it can operate in confined spaces, such as between buildings or among trees.

It adds that the jetpacks use a "fly by wire" system to prevent a pilot attempting dangerous manoeuvres, and to bring the aircraft to a hover if they let go of the joystick.

It is also fitted with a "ballistic parachute" that can "safely recover the aircraft from a few metres above the ground".

The key advantage for firefighting, however, is probably the jetpacks’ relatively high payload: they can carry up to 120kg, which is considerably more than the quadcopters that are their closest competitors.

The Martin jetpack was invented by New Zealander Glenn Martin, who had been working on the technology for 30 years. The company listed on the Australian stock market in February and its controlling investor is now Kuang Chi Science, an emerging technology and innovation firm listed in the Hong Kong stock market and run by 32-year-old businessman Liu Ruopeng.