A survey of the competitiveness of 20 national construction industries, carried out by the Korea Institute of Civil Engineering and Building Technology, shows South Korea’s own industry has fallen from sixth to 12th place over the past three years.

This is the first time the industry has been out of the top 10 since the institute began publishing annual rankings in 2011. 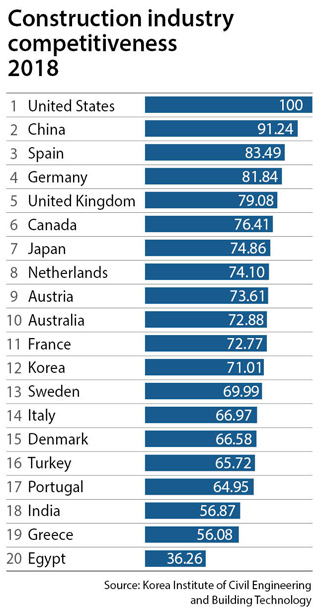 First place was taken by the US, which was given a score of 100, and other countries were assessed as a percentage of that. Second place was China at 91, followed by Spain at 83, Germany at 82 and the UK at 79.

The institute commented that the US won the top spot on the strength of its design industry, whereas China gained second place because of its building prowess. Korea’s position declined because it lacked either the cutting-edge technologies of advanced countries or the low cost base of newcomers.

Korea’s construction industry has been a major source of export earnings for the national economy: between 2007 and 2016, it totalled $538bn, more than semiconductors or shipbuilding. However, overseas sales have fallen 20% between 2016 and 2018.

Domestic activity is also weak. According to US consultancy Global Insight, Korea’s construction market in 2018 grew 0.3% compared with Japan’s 1.7%. Japan’s construction industry has risen in the rankings as Korea’s has fallen, coming up from 11th place in 2011 to seventh in 2018.

Park Hwan-pyo, principal researcher at the institute, commented: "In a variety of categories, Korea’s construction industry was rated low, including for transparency in the public sector, the level of awareness on corruption, the safety of the construction environment as well as obtaining both resources and labour and the availability of distribution infrastructure."

The institute recommends that Korea’s industry embrace the wave of digital technologies that are entering the construction industry, and should also emulate Chinese companies’ ability to raise project finance and leverage its government’s diplomatic salesmanship.

It adds that chronic corruption may also be a bind on innovation, and should be rooted out.