The planned $2bn Lamu coal plant in Kenya, majority financed and built by China, would be a costly mistake and should be cancelled, says a report released this week by the US-based Institute for Energy Economics and Financial Analysis (IEEFA).

The three-unit, 981MW-net facility would lock the Kenyan government into a 25-year power-purchase agreement (PPA) costing consumers more than $9bn, even if the plant never generates any power, the report argues.

The developer’s claims about the cost of electricity generated are unrealistically low, while assumptions about how much electricity the plant will generate are overly optimistic, it says. 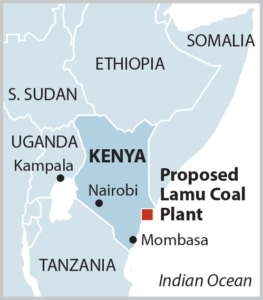 Using more realistic assumptions, electricity from the plant could cost as much as 75 cents (US) per kilowatt-hour on average during the years 2024 to 2037, which is more than 10 times what proponents have claimed.

He added: "The original assumptions that justified the project, no longer apply."

The report examines how the Lamu project was intended to replace the country’s ageing diesel-fired generation and strengthen baseload capacity, but factors such as lower-than-projected demand and higher costs for imported coal have "rendered the plan obsolete".

Schlissel further argues the Lamu plant, which has been the subject of local protests over its environmental impact, would slow the development of readily available, low-cost geothermal, wind and solar resources.

First proposed in 2015, the Lamu plant is scheduled to enter commercial service in 2024 at an initial cost of $2bn.

The bulk of the financing, $1.2bn, comes from a loan agreed in 2015 from the Industrial Commercial Bank of China, reported Kenyan newspaper Business Daily.

A contract to build the plant was awarded to Power Construction Corporation of China in 2016.

The report found that Amu Power’s claims for the low cost of generated electricity do not include costs for port upgrades that would be required to bring coal to the plant, nor construction of the transmission infrastructure needed to distribute the power.

These necessary elements would "dramatically increase" the overall cost of electricity borne by consumers and taxpayers, the report said.

It added that the Kenyan government’s own analysis showed that the country’s abundant renewable resources render no new coal generation necessary in the country until 2029 at the earliest.

"Building this facility would burden consumers with costly power for years to come," said Schlissel. "In addition, the project would make it difficult, if not impossible, for Kenya to meet its obligations under the Paris Agreement on climate change."

The report is accessible here.Â